Thought it might be getting a little late for third coffee, but looked at the clock and it was barely after 9:00 AM! Maybe we should go back to standard time every day!

I would prefer local solar time, and had thought next best would be permanent standard time, but maybe setting the clocks back an hour every day would be even better!

Exposing your skin to dawn/dusk sunlight (UV index near zero) for 30 minutes provides at least 24 hours of protection against sunburn.

Me: It’s not even 8:00 PM yet, and it’s already nearly dark outside. I guess it is a full month since the solstice.

Jackie: Don’t go getting depressed though!

Me: No, that’s for later. Now I just get anxious that in a few months I’ll get depressed.

My friend Chuck​ likes to point out that we’ve already reached the worst of the winter darkness: Tomorrow the sun will set at 4:27 PM, and that’s as bad as it will get. As early as December 12th the sun won’t set until 4:28, and it just gets better from there.

For people working a regular job, a later sunset is a big deal (although it’s not really a big deal until January 24th, when sunset time is finally after 5:00 PM).

For me, though, it’s sunrise that really matters, and that keeps getting worse for a long while yet. We don’t hit our latest sunrise until December 30th when it’s not until 7:15 AM—and then it just stays there for almost two weeks. Things don’t really start getting better until January 12th, when the sun rises at 7:14.

So really, I should be luxuriating in the relatively early sunrise this morning. The sun will be up at 6:59 AM—before 7:00! Why, it won’t be this good again until February 5th! That’s after Groundhog’s Day!!!

(All these dates and times local to Savoy, Illinois in 2015–2016. Ephemeris data for your location will vary. But if you live in the mid-latitudes of the Northern Hemisphere, they won’t vary by enough.)

This tree, with some sort of little red fruits all covered in ice by a freezing fog, kinda looks sunrise pink. Maybe I could pretend it is the dawn. Of course, before dawn it’s too dark to see it. 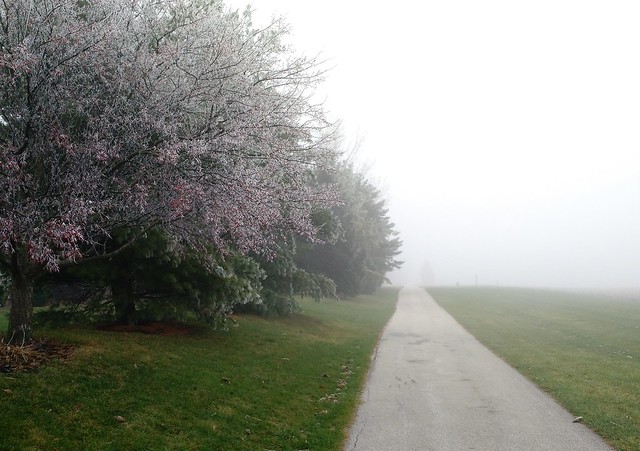 Despite my anticipatory angst, I’m actually holding up pretty well so far. I’m sure the extra time spent walking outdoors is helping. Yesterday, I walked to my taiji class, then walked around during the time between the two classes (with Jackie for the first half of her walk home, and then around playing Ingress), and then walked home again after my second class. It was just a little over 6 miles, but my longest walk in a good while. I’m sure the two hours of taiji helped as well.

I’m prone to a particular bit of black humor this time of year. Usually a little earlier—maybe at the beginning of November—I’ll mention how early the sunsets are, how late the sunrises are, and point out that things are just going to get worse for six more weeks, and that it’ll be twelve weeks before things are this good again.

I joked similarly to my brother a day or two ago, and he pointed out that, although my joke is true in October or November, in December it’s wrong: by this point in the year things almost don’t get any worse. And he’s right. After all, the word solstice comes from the Latin for standstill.

Rounded to the nearest minute, we have already reached our earliest sunset of the year. That is, today the sun will set at 4:27. It will continue to set at 4:27 until December 13th, when it will set at 4:28.

I didn’t use to take much comfort in this. Knowing that things didn’t get much worse from here on out didn’t help when I was already depressed. But these days I tolerate the dark pretty well, and that means that I can take comfort from knowing that things are already about as bad as they’re going to get. Yes, it will still be mostly indoor exercise weather until March, but that’s okay—I have strategies for indoor exercise.

I’m not sure exactly what to credit for the improvement. I suspect that not working a regular job is the biggest factor, but taking vitamin D supplements seems to have helped as well. And, of course, getting enough exercise is both a cause and an effect.