Sloth magnetic poem of the day:

A wonderfully useful tool. How walkable/busable is your address? https://app.traveltimeplatform.com/

Largely because I’m wearing the fabulous bespoke green lopi socks that @jackieLbrewer knit for me (under down-filled booties), I am not cold. 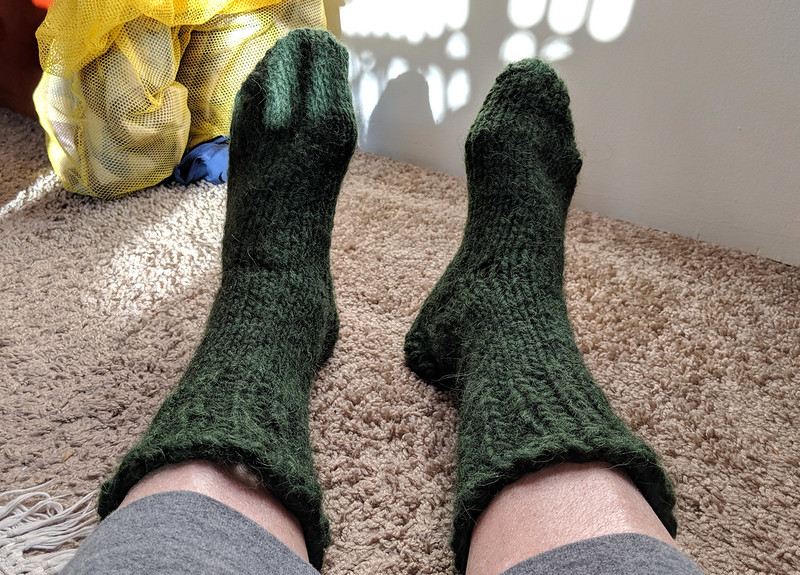 Jackie and I went out for a walk this morning, as we do. The double-digit negative windchill seemed to offer a bit in the way of bragging rights, even if it wasn’t nearly as cold as a year ago.

I’ve got a bit more in the way of clothing choices this year, having bought a bunch of cold weather gear for winter running, but I didn’t use much of the new stuff.

I wore my Alaska pipeline coat, of course. Under that I wore my Dale of Norway sweater that Barbara bought on her last trip to Antarctica. Under that I wore a silk mock-T base layer. For my lower body I wore my flannel-lined jeans, which were just the right weight by themselves. (I’ve got a pair of fleece-lined khakis a size larger, big enough to wear tights or something under, for when it’s really, really cold, but I didn’t need them today.) I wore silk sock liners under my usual wool/silk-blend socks, under my new waterproof Lems boulder boots. (I’m very pleased with these boots so far. All the minimal/barefoot features I want, waterproof, and warm enough for the bitter cold.)

The one imperfect thing about the Alaska pipeline coat is that the hood is hugely oversized (I assume so that it can go over a hardhat) and tends to slump down over my face, obstructing my vision. So to keep my head warm I wore the Khyber pass hat that Jackie made me. (If you remember the war in Afghanistan, the Northern Alliance forces wore the same sort of hat. Very versatile—roll it up and it covers the top of your head to keep the sun off. Roll it down and you’ve got a thick wool hat you can pull down over your ears.)

All of that, except the bolder boots, was pretty much what I was wearing a year ago in the picture above, but this year I had one novel item: I wore a buff over my neck and the lower half of my face. It’s just a thin layer of microfiber, but over my beard it was dramatically warmer than just the uncovered beard. I’ve had buffs for years, but I mostly wear them in hot weather (to keep the sun off my neck), so I think of them as cooling rather than warming. It was amazing to find how much of a difference it made just to put a layer over my beard.

Testing to make sure I’ll be able to use the micro.blog tools when they start supporting posting to blogs. I can post here using Quill, so micropub is working, but running the test suit at micropub.rocks produces only failures.

After Steven suggested that hanging out near a fireplace would help with SAD I hunted all over Champaign-Urbana, but somehow it never occurred to me that there’s a fireplace right in the Winfield Village community room!

I took some pretty good pictures of Jackie in 2019. Here’s a selection:

There are plenty of others. Visit my images site for a bunch more pictures of Jackie and other things I thought were worth taking a look at.

When you feel sick, you prefer to sit still. This behavior pattern is not only well known, it even has a name: “inflammatory-induced sickness behavior.”

This rather dense article from back in 2010 describes the problem: Inflammatory modulation of exercise salience: using hormesis to return to a healthy lifestyle. It also proposes a category of solutions: hormesis. That is to say, any of a set of mild metabolic stresses that prompt a response greater than “just enough” to stave off the damage produced by the stress itself.

Besides exercise, the article suggests two other broad categories of available hormetins.

One is related to food, and consists of the obvious stuff that everybody knows: Avoid industrially produced edible substances. Consider such modalities as time-restricted eating, calorie restriction, or fasting. Include foods rich in plant polyphenols. (In other words, “Eat food, not too much, mostly plants.”)

Each of these things will produce some mild metabolic stress. As long as you don’t overdo it, that mild stress will produce a stress response greater than necessary to handle the stress itself, with the side-effect of bringing down systemic inflammation. With the systemic inflammation eased, you’ll start feeling like moving again. That puts the potent tool of exercise back on the table.

Nature has a more recent article on all this stuff, which is sadly behind a paywall.

I had not previously been aware of the site Forecast Advisor, which tracks weather forecasting apps and compares their forecasts to the actual weather in whatever specific place you care about.

Of course, accuracy is not a perfect metric for usefulness—a weather app that’s close enough that I’m wearing the right clothes for the day is more useful than one that’s usually one degree closer, but misses major turns in the weather.

I get a steady stream of email from people saying, “I saw you linked to some webpage and I thought you might want to share this other webpage with your readers!”

This is never going to work.

What might work is treating me like a person who might have common interests: Send a link. Tell me what it says (so I have a reason to follow it). Let me decide if it’s so interesting I should share it with my readers.