My brother shared this comic with me a while back. I think it captures something—something about CrossFit, but also about how people react to anyone who’s “really into” anything. I’m not a crossfitter, but my expanding interests in fitness and movement have produced similarly horrified reactions to the prospect of having to engage with me on the topic—less frantic only because people are not literally trapped in an elevator with me.

I bring this up because the recent book Lift, by Daniel Kunitz, can be read as a love song to CrossFit (although he has done a pretty good job of discreetly tucking away most of the CrossFit stuff near the end of the book).

The book is more than just one thing, and even more than a love song to CrossFit it’s a fascinating cultural history of fitness.

Kunitz uses the term New Frontier Fitness to refer to the whole emerging cluster of practices centered around the idea of “functional” fitness: CrossFit, MovNat, Parkour, AcroYoga, obstacle course racing, and any number of gymnastic and calisthenic exercise practices. Kunitz doesn’t mention Katy Bowman’s work, but it obviously fits in as well. 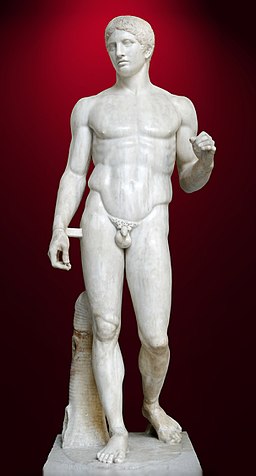 A key thesis of the book is that the motivating genius of New Frontier Fitness is not without precedent: It springs directly from ancient Greek ideals of fitness, and he references both ancient Greek representations of a fit body (such as the Doryphoros sculpture) and statements by ancient Greeks not unlike Georges Hébert’s admonition “Be strong to be useful.”

This cluster of ideas—in particular that fitness was a moral and social obligation, but also that functional fitness produces a beautiful body as a side-effect (rather than as a goal)—largely disappeared after the Greeks, except in tiny subcultures such as the military. It has only reemerged in the past few years as the various things that Kunitz refers to as New Frontier Fitness.

In between—and the 2000-year history of this makes up of the center of Kunitz’s book—there were many things that were not this particular tradition of functional fitness, but instead were aimed at producing a particular type of body (body-building, aerobics, etc.)

It’s impossible for me to talk about Daniel Kunitz’s Lift without comparing it to another book—Christopher McDougall’s Natural Born Heroes. They are similar in at least two ways. First, they both compare modern fitness culture to that of the ancient Greeks. Second, they both appear to have been written just for me.

A third book that I read recently but haven’t written about is Spark, by John J. Ratey, which overlaps in the sense that all talk about intensity as a key aspect of exercise to produce functional fitness. (If all you’re interested in is appearance and body composition, you can get most of the way there with a diligent application of low-intensity exercise, but some amount of intensity is highly beneficial for functionality and brain health.)

All three books are worth reading.