Rapunzel was poorly yesterday. In the morning it was just some weakness in her front legs that we’d seen before, but in the early afternoon it got much worse—rather abruptly, she was unable to stand.

I tried carrying her to her food and her water and her litter box, but being unable to stand, she couldn’t make use of them.

At bedtime I put her in one of her favorite nighttime spots, then laid down on the floor next to her for a long time.

In the morning we found that she’d somehow made her way downstairs under her own power and curled up on the floor in the living room. She still couldn’t stand, still wouldn’t take water even when I brought her water dish to her, even when I tried holding her up.

I called the vet and made an appointment for mid-afternoon.

The vet examined her and offered a new diagnosis. Before, when it was just the front-leg weakness, the doctor had thought it might be a nerve problem, perhaps pinched where they exited her spine. Based on how things had progressed and her other symptoms, the vet now thought it was probably a brain tumor.

She offered to get us an emergency consult with a veterinary neurologist, but that didn’t seem promising. Rapunzel was a very old cat. If they found a brain tumor, what could they do? I doubt if she would have survived either surgery or chemotherapy. I didn’t see any prospect for a return to health, nor a long life. The vet agreed that euthanasia was probably the best choice.

So this afternoon Jackie and I said goodbye to Rapunzel after 17 years.

The image at the top is how I remember Rapunzel. She always liked to be on top of things. But here are another few pictures.

Finally, here’s a picture of the way I imagine Rapunzel would have been looking at us toward the end, if she’d been still able to jump up to the window sill. (In actual fact, this picture was taken when we were running the vacuum cleaner, and she was looking on disapprovingly, waiting for us to stop.)

Rapunzel was the best cat. She was friendly and fierce. She tolerated us and never held a grudge. She could get along on her own just fine, but was always glad to see us. She sat in Jackie’s lap most mornings. Instead of sitting in my lap, she liked to climb into my arms when I sat at the computer—and I was happy hold her, although it made it hard to type.

Good bye Rapunzel. Thank you for 17 wonderful years. We already miss you terribly.

Successfully got ’Punzel’s meds down her gullet for the second day in a row. I think. 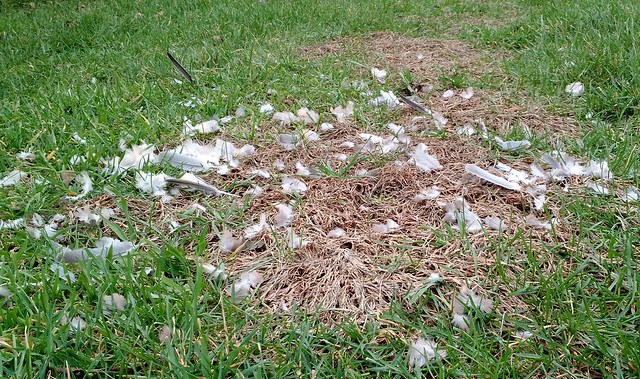