What a terrible headline!

I suggest: “In a city enhanced with crows, idiots try to chase them away with lasers.”

Source: A California City Is Overrun by Crows. Could a Laser Be the Answer? – The New York Times 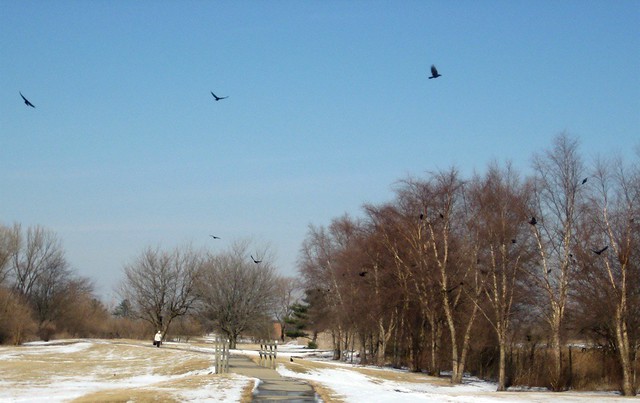 A pair of mourning doves built a nest in this former squirrel nest just outside my study window. I just saw a crow visit the nest and fly off with an egg in its beak. Sometimes the circle of life is pretty small.

Jackie and I went for our first bike ride of the year. We followed our traditional first-ride route, around Kaufman Lake, past the Olympic Monument, around Parkland College, and then back. This year we went 6.27 miles.

I’d been hearing cardinals for several days, but out on this ride we got definitive expressions of bird spring. The robins are back, as are the red-winged blackbirds. I saw a crow fly up out of Copper Slough with a huge wad of nesting material in its beak.

The ride itself went fine as well. No mechanical problems. No problems with Jackie’s wrist. There had been a couple of previous days when it would have been warm enough to ride, but those days were very windy. It was nice to just wait for today and not have to deal with the headwinds.

I think we’re all set now, to be able to ride whenever we want. In particular, if there’s a day when it’s nice enough to ride first thing in the morning, we could ride to the Fitness Center and then to taiji. (That’s a bit long and complex of a ride to try to combine it with our first “shakedown” ride of the year.)

This is the grassy spot near the rear of our apartment complex where we do our taiji practice.

Today’s practice was special because we had an audience: a rabbit, a squirrel, three crows, and two juvenile groundhogs showed up to take an interest in our activity. They didn’t seem troubled (although when a guy came past with a dog on a leash, the rabbit most definitely took notice).

First thing in the morning I’d gone for a run and spotted a gazillion cedar waxwings. (Note: number of cedar waxwings approximate.) Actually, they would have been in this picture, too. Just past the little hill is the Copper Slough, and just across it is the path that runs around Kaufman lake, and it was just about here that I saw them.

I added a second lap to my usual run around Kaufman Lake, bringing the distance up to 2.41 miles—my longest run this season, and good progress toward getting back in shape.

After my run, Jackie and I went for a bike ride. We were testing both the route and ourselves for a possible ride to Philo in a few days. The ride to Philo, with a stop at the Philo Tavern for lunch, is our traditional first long ride of the year. Today’s ride covered the first half of the route to Philo, then headed back into town with a stop at Meadowbrook Park, making it a 17-mile loop. That went fine, so we figure the 28 mile round trip to Philo should be doable no problem.

We’re starting to get all sorts of wild ideas about possible long rides later in the summer. But our local wildlife audience is keeping things pretty wild right here at home.

Just home from visiting my Dad in Kalamazoo.

Had a good eye for spotting wildlife on this trip.  I spotted a young raccoon about halfway up a tree (visible from where I was sitting at the table in Katy’s house).  Later, from the conversation nook, I spotted a stuffelbeam (aka groundhog), that I suspect had a den very near the house.  A bunch of spicebush butterflies appeared on the last evening we were in Kalamazoo—perhaps just-emerged from their chrysalises (as we hadn’t seen any before), and later a hooded warbler that came to bathe at the pool outside the dining room window.  There were lots of hummingbirds at the feeders, plus the usual birds—I got a good look at a cardinal that came close to the window, and heard several crows that seemed unhappy to have us come home after the art show.

That was not the end of it.  I got a great look at a chipmunk just outside the window, and spotted two feral cats (unwelcome visitors on the property, even though I suggested that cats would be the one effective way to cut down on the mice chewing up the electrical wiring in the cars).  My dad spotted a turkey just outside the dining room and we all got a look at it.  A pair of phoebes had built a nest just under the eaves of the screened-in porch.  We could see the female sitting on the nest, and then spotted her again when she took a break in the late afternoon, sitting and preening for perhaps 15 minutes before returning to the nest.  And then, just twenty minutes or half an hour outside of Kalamazoo, I spotted a fawn just outside of some woods the track ran through.  (Poor Jackie didn’t get to see the fawn, as we zipped past in just a few seconds.  I think she got a look at everything else.)

I got several useful things done—did the crucial bits of setting up my dad’s website to use WordPress (it had previously been hand-coded html) and got two of their old computers decommissioned (deleted and overwrote the data on one’s disk drive; removed and smashed with a sledgehammer the disk drive from the other).

We went to the art show (the reason for visiting this weekend rather than some other), and got to see a lot of really nice art.  Visited the booth of Peter Czuk, an artist who crafts things from wood.  Richard and Katy had years ago given me a letter opener that he’d made, and (as I actually use it to open letters) the sharp edge had gotten dull.  I’d talked to him about it last year and he’d indicated that he could sharpen it, so this year I brought it along and got a fresh edge put on it.  Hopefully now it’ll once again open letters nicely for years to come.

Also at the art show, got a chance to chat with Steve Curl, one of Steven’s childhood friends, who is working as an artist these days, making sculptures of robots and ray guns.  (But who oddly doesn’t seem to have a website.)

We took the train both ways.  Our layover on the way up was just long enough for lunch.  On the return trip it was a bit longer, so we had some time to hang out in the great hall.  I spent a few minutes trying to find a way to photograph it in a way that captured what a great space it is.  I thought this picture was sort of okay.

All in all a great trip.  Despite the long list of things seen and done, we mostly just visited with the family and did some walking.