Jackie and I spent the morning at Busey Woods, clearing bush honeysuckle.

As you can see, Jackie is very pleased with her saw.

Last Thursday Jackie and I (along with several other Urbana Parks Department volunteers) spent a couple of hours clearing invasive bush honeysuckle at the Perkins Road natural area. (The photo is from a year ago. Sadly, we did not have a fire this time. We just piled the honeysuckle up in great huge brush piles.)

Like last time the work consisted of cutting and then carrying or dragging honeysuckle trunks and branches across a forest floor made rough by many tangled roots and littered with small stumps where honeysuckle had been cleared in past.

The next day Jackie commented that her feet were tired, and suggested that the stewardship work was more to the point than the various foot exercises suggested by movement teachers such as Katy Bowman and our new local Restorative Exercise Specialist Ashley Price. (Exercises such as rolling your foot on a ball or standing in boot trays filled with river rocks.)

But to actually use your whole body capabilities to perform real work? To engage in bending, squatting, dragging, lifting, carrying—and do so while in nature, as part of a community effort, making the land better? So much better.

Nothing like walking through tall prairie grass to clean up a pair of muddy boots.

I’ve been occasionally joining Jackie when she does stewardship workdays at natural areas around the county as part of her Master Naturalist work. They’re fun, and they fit in very well with my shift away from exercise and toward movement. Our work Sunday, clearing garlic mustard from the South Arboretum Woods, is a great example.

(Garlic mustard is a nasty invasive, largely because the first-year growth leafs out very early, and covers the ground almost completely. Native plants emerge a little later in the spring, by which time they can’t get enough light to get going. The upshot is that the understory loses most of its natural diversity, becoming just a vast carpet of garlic mustard.)

What we did Sunday was make our way through the woods, spotting and then pulling up all the second-year garlic mustard. (It’s a biennial. The first year is the low ground cover. The second year it puts up a flowering stalk and produces seeds. If you can get the flowering stalks before they set seed, you can make a dent in the local garlic mustard density.)

What struck me was how similar our activity was to “gathering” à la hunting and gathering. It was physically similar—walking through the woods, and then squatting, bending, reaching, and pulling. It was also mentally similar—doing exactly the same pattern-matching that someone seeking to gather edible or medicinal plants would do.

I suspect that both of these aspects of this activity enhance the well-known beneficial effects of “forest bathing” (aka spending time in the woods).

The area we were clearing has a lot of downed branches, big and small, some partially or completely hidden by the ground cover, making for a complex walking surface—more good stuff for both the body and the brain.

Of course, volunteering for and participating in a stewardship work day produces all sorts of additional benefits—in particular, doing something good for the local communities (both the human community that uses the space and the natural community that inhabits it) is rewarding, as is making social connections with the other volunteers and engaging together on a common effort.

Every time I do one, I am reinforced in my desire to do more stewardship workdays, despite my slothful nature.

(The picture at the top is another view of the Cecropia moth that Jackie spotted while we were there.)

On a stewardship work day clearing garlic mustard at the arboretum, Jackie spotted this guy just out of its chrysalis—a Cecropia moth still trying to get its wings pumped up enough to fly:

Jackie and I spent a few hours at the Urbana Park District’s Perkins Road Site, some land just behind the Urbana Dog Park that used to belong to the Sanitary District and was used for sludge ponds. The area is being restored as wet prairie.

Jackie and I joined a crew of about a dozen people cutting invasive bush honeysuckle and burning it.

I went to one or two stewardship workdays with my dad in Kalamazoo at preserves belonging to the Southwest Michigan Land Conservancy, but (probably just because of the details of what needed doing at those sites those days) didn’t come away with enough of a sense of accomplishment to prompt me to find similar opportunities here.

Since Jackie got involved with the Master Naturalists she’s been doing a lot of these, and I’ve joined her on several. We cut bush honeysuckle at Meadowbrook Park, and on another day gathered prairie seeds there. We pulled winter creeper at Weaver Park. And yesterday we were back to clearing bush honeysuckle—with the bonus that, because this site makes it difficult to haul things out, this time we got to burn it as well.

There’s an atavistic satisfaction that comes from playing with fire. Highly recommended. Don’t burn yourself. 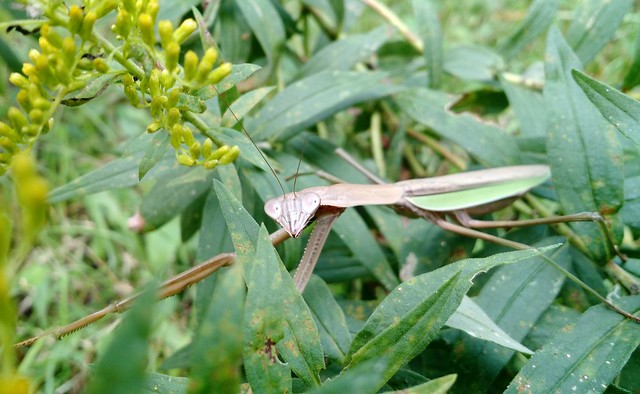