I make an effort to get out into nature as often as possible. With our little prairie and woods nearby, it’s possible almost every day. Larger natural areas—Forest Glen, Fox Ridge, Spitler Woods, etc.—are within easy driving distance.

With my focus having been on nature for a long time, I was interested to read this piece in The Guardian:

In recent years, stressed-out urbanites have been seeking refuge in green spaces, for which the proven positive impacts on physical and mental health are often cited in arguments for more inner-city parks and accessible woodlands. The benefits of “blue space” – the sea and coastline, but also rivers, lakes, canals, waterfalls, even fountains – are less well publicised, yet the science has been consistent for at least a decade: being by water is good for body and mind.

Source: Blue spaces: why time spent near water is the secret of happiness

We do have some water right here where we live. There’s the little creek that runs behind Winfield Village and a couple of little detention ponds, and they do have some wildlife. I often see turtles, snakes, groundhogs, and many sorts of birds. I’ve occasionally seen mink, coyotes, and bald eagles.

I do feel the lack of a beach. The closest is Indiana Dunes, but it’s nearly 3 hours away. I’ve done it as a day trip, but it makes for kind of a long day.

The article makes for a good reminder to be sure to include blue when you’re making sure you get out into the green.

I think Champaign-Urbana is great. The university gives it cultural and scientific amenities far beyond its size. It’s a cheap place to live, which not only enables my lifestyle, it enables the lifestyle of any number of clever creative people who choose to live where they can make enough from their art to support themselves.

Just about the only thing that CU really lacks is relief—that is, a variation in height from one place to another.

What I mean to say is: it’s really, really flat. Take for example, this image: 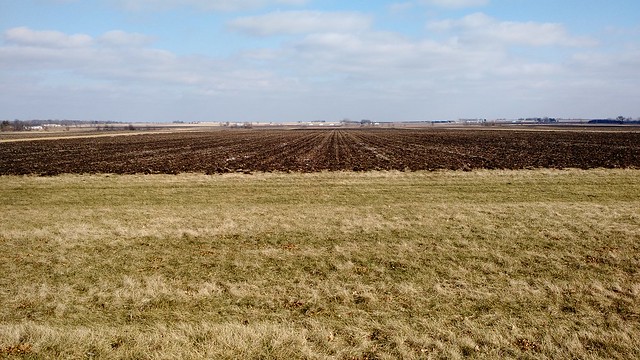 That’s the hilly direction. I’m looking toward Yankee Ridge, which is about three miles away from where I’m standing. It may not look like much, but that hill in the distance is a big deal when you’re on a bicycle. At least, it is if you’re used to riding in Central Illinois.

Given the terrain, we don’t get enough hiking on hills, unless we make an effort to go to the hills. So, that’s what we did yesterday. We drove to Fox Ridge, a nearby state park which has some hills.

I remember hiking in Fox Ridge last summer, shortly before our big Kal-Haven trail hike, and finding that we were in pretty good shape for dealing with the hills, despite our very limited practice. That was less true this spring. I was a bit tired from my unexpectedly fast run the previous day, and we were both a bit out of shape from a lack of hills over the winter.

Still, we did okay. We saw some spring wildflowers, like these dutchman’s breeches:

And this solomon’s seal:

Total hiking was probably only a little over 3 miles, but the hills made it a very different sort of hike than our much longer hikes closer to home. Plus, we got to spend time in the woods.

So, that’s another bonus of Champaign-Urbana: We’ve got Fox Ridge State Park just 50 miles away.

I don’t know when I quit crawling. Probably around first grade. I’m not sure why, either. Because it was something babies did, and I was grown up, I expect.

I don’t remember my parents trying to get me to quit crawling, but I’ve seen other parents try to convince their children to stay off the ground, in the interests of either propriety or cleanliness.

At any rate, most people who crawled all the time before they were five years old have so completely lost the habit it doesn’t even occur to them as a possible way to get under or through something.

When I trained with the local parkour group, the first thing the group practiced was quadrupedal movement—crawling on hands and feet.

After that practice session, I added quadrupedal movement to my own practice, and the first time I went out to do it, Jackie decided to come with me.

(It happened like this: I told Jackie I was going to go play in the woods. “What are you going to do?” she asked. “Crawl and roll on the ground,” I said. “Can I come?”)

We did some rolling, both just rolling sideways and shoulder rolls. We also did some crawling, both prone (bear crawl) and supine (crab crawl).

The actual amount of time spent crawling was pretty small—I doubt if it added up to as much as 5 minutes—but it turned out to be a surprisingly successful bit of practice, because just in the week since then, it has usefully informed the way we dealt with obstacles repeatedly.

The first time was last week at Fox Ridge State Park. At one point the trail was blocked by some fallen trees. There was more than one trunk, making the geometry a bit complex for climbing over. There was enough space underneath the bottom trunk that it would almost have been possible to just do a “step under” move, except we were wearing packs, meaning that we needed another eight or ten inches of clearance.

If I hadn’t just practiced crawling, I don’t think it would have occurred to me that the easiest way to get under the trunks was to crawl on my hands and feet. We’d probably have done something complex, like both take our packs off, have me step under the barrier, handed both packs through (or over), and then have Jackie follow under the barrier.

With the recent reminder that crawling is simple and effective, that’s what we did. I tried to step under, found that there wasn’t clearance for my pack, so crouched down further, put my hands on the ground, and crawled on through. Took about five seconds. Got my hands a little dirty. Worked great.

Yesterday we hiked the backpacking trail at Forest Glen, which presented a problem for which supine crawling made an excellent solution.

It’s hard to capture the steepness of this bit of trail in a photo. Not only was the trail steep, it was also wet, and the mud was slippery.

Jackie went down first, and quickly found that the combination of steep and slippery made it too dangerous to attempt to go down bipedally. She dropped down and did an inverted foot-hand crawl (aka supine crawl or crab crawl). It made for a quick, efficient, safe way down the steep bit in the path.

I followed behind, just the same way.

Rediscover quadrupedal movement. Besides being a way to get under or through something, it’s also very stable—perfect for dealing with loose, rugged, steep, uneven, or slippery ground.

This is just a quick post to note that my calf injury seems to have healed completely.

Last week I did two test runs—a 0.5 mile run with no turns, followed (after a rest day, to see if I had any delayed pain or swelling) by a 0.63 mile run with some turns.

When neither of those caused any problems, I went out later in the week and did my usual early-season short run of 1.5 miles.

Over the weekend, Jackie and I hiked nearly 6 miles at Fox Ridge, a state park about 60 miles from here. It’s another place where there’s elevation change available, and a set of trails to take advantage of it.

I took a rest day after the hike (having learned that lesson), and went out this morning for a 2.15 mile run, my usual mid-season short run.

All went well. No pain, no soreness, no swelling. There’s no tender spot in my calf when I poke at it.

I’ll take it quite easy as I ramp up speed and distance going forward, but I’m declaring the injury officially healed.